You climb aboard the shuttle which is intended to convey you off this dingy planet. Embedded in the metal walls of the shuttle are bones, sun-bleached and carved with innumerable runes of protection. The only seats in the shuttle seem comfortable enough, although they have the familiar texture of human-flesh leather, tattooed over and over in a crabbed, spiky hand. What little is legible is clearly reproductions of necromantic theorems, the very ones which hold your ever-crumbling but never-dying empire together. There is no seat at the control console, merely a severed head, mummified by time, on a pike. Its milky-white eye briefly alights upon you, and the door you entered in slides closed with a distressingly organic sound.

It fucking sucks. Just an abysmal experience, and the chairs make your ass hurt after like ten minutes. But if you’re going to be a necromancer there’s a whole, like, aesthetic to deal with.

Welcome to the Empire Undying

In this game, you will play a group of necromancers and knights, stuck in some corner of the vast empire, attempting to solve a mystery that is, in turn, attempting to kill you all. The bad kind of "kill," the sort you don't bounce back from. Explore ancient sites and forgotten ruins, unravel conspiracies which have endured for millennia, and make out with one another, because you are hot and hurt and surrounded by bones so you have to get that tension out somehow.

The Empire Undying is inspired by The Locked Tomb Trilogy, by Tamsyn Muir, and uses some elements from Lasers & Feelings, by John Harper.

In order to download this game you must purchase it at or above the minimum price of $10 USD. You will get access to the following files:

Support this game at or above a special price point to receive something exclusive.

If you are under a financial duress which makes it unduly difficult or impossible to pick up a copy of this game for full price, take a community copy. Community copies cost nothing and there is no need to prove that you need one, just take them. When someone buys a copy of the game, I add a community copy to the pool. 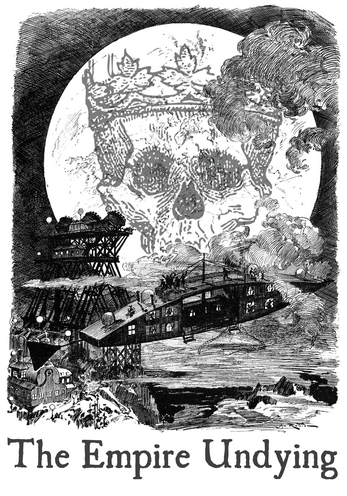