“Doctor, where are we?” your companion asks as they step out of the TARDIS.

“I’m not sure...” you say. “It looks a lot like Earth. Early twenty-first century. Smells... normal. Nitrogen balance is a bit off, but can’t see why the TARDIS brought us here for that.”

“Oh no.” You step out onto the planet, and sure enough, there’s another blue box, with another Doctor in the door.

“—Nitrogen balance is a bit off,” they say, and then they spot you. “Oh no. This isn’t the Tunguska event, is it?”

“No. Nor the first flight to Proxima Centauri. Something very strange must be occurring to bring me here twice.”

As if on cue, there is another VWORP! VWORP! VWORP! occuring nearby. The other Doctor sighs. “Three times. At least! Come on then, let’s greet the next one.”

“How like that one,” you grumble to your companion as they wanders off. “Putting themself in charge for no good reason. I should be the one in charge! After all, I was here first.” Reluctantly, you follow the other incarnation of yourself.

In Day of the Doctors, all players are incarnations of the Time Lord known as the Doctor. You’ve all bumbled your way to Earth at the same time. Probably means trouble. This game is a hack of Lasers & Feelings; as such, it's a one-page game with fairly elegant rules that's designed to be picked up and played extremely quickly with no prep whatsoever. Things will tend toward the silly and chaotic, as you get in each others' way while trying to save the earth from, oh, probably the Daleks?

Because this is explicitly a Doctor Who game, and I'm not the BBC, this game is 100% free. You don't even need to download the PDF... that .jpg to the right is the entire game. If you want to support it, consider checking out my other games, or pick up something by L&F author John Harper!

just FYI, there’s currently a Lasers & Feelings jam going on. You may submit your game if you want! 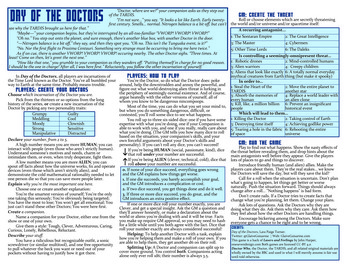